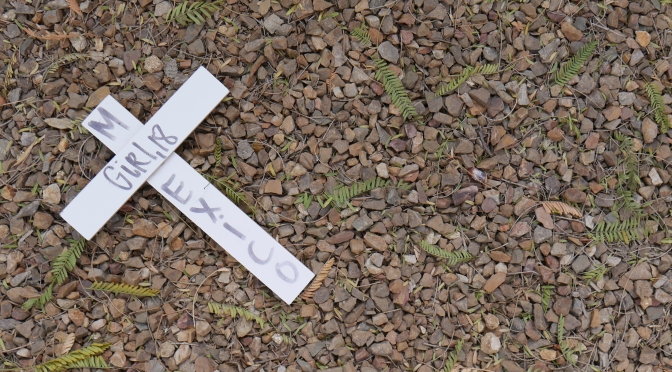 On the Sonora, Mexico side of the border wall running through Nogales, I bent over to pick up a white cross from the dust. “Girl, 18, Mexico,” it read. Two words and a number, all that was left of a life cut short by this desert whose dangers we make light of as “a dry heat.” A few yards away musicians played for the crowd assembled on both sides of the wall, a community of people intersected by the rusty metal slats that unnaturally divide our life here in the Sonoran desert. These bars that seek to diminish our humanity on both sides as men in Michigan and Iowa and Washington debate the contours of our lives. Who comes, who goes. Who stays, who leaves. You would not dare to ask a person which of their arms they would like to keep, but here we stand under the daily threat of our communal body being hacked, vital limb from vital limb. They threaten to take from us those people that we cannot live without, and expect that we will accept it heads bowed low.

I looked down at the cross in my hand and felt the weight of it wash over me. For the past two years of my life, I have fought to make the world #SayHerName #SandraBland from the moment that those words left her sisters lips at the pulpit of Hope AME in July of 2015. Thousands of hours, of miles, of images posted from the jail where she died. Relentless, consuming, determination that she would not be silenced. Hundreds of videos covering the progress of the case, and documenting the activity of the police. We said her name and it drew out with it others: Natasha McKenna. Renisha McBride. Yvette Smith. Rekia Boyd. Gynnya McMillen.

I looked down at the cross in my hand and realized that we could not draw out her name from that wood anymore than we could from the sand and dust that had cradled her. I could not scratch behind the paint to unearth it. I could not cut into the wood. I could not claw the truth out of the sand.

How do we find justice for her when we cannot even Say Her Name?*

As is the tradition of the School of the Americas Watch, the crosses were picked up and the names read one by one. 147 deaths in our Sonoran desert this year alone; 147 that were found at least. Driving through our border lands, it is easy to see how some could disappear without even two words and a number to mark their passing. Each name was read, as the crosses were lifted, and voices raised to answer “Presente.”

The School of the Americas was opened by the U.S. Military in the Panama Canal Zone in 1946 and trained Latin American soldiers in assassination, interrogation, and psychological tactics to control the politics of the region and quell uprisings of the people. It’s graduates include Manuel Noriega, Leopoldo Galtieri, and Hugo Banzer Suarez. In 1980, soldiers trained at the School of the Americas were involved in the assassination of Archbishop Oscar Romero as he celebrated Mass. Four years later, in 1984, Panama was able to rid themselves of the School, but it re-opened in Fort Benning, Georgia the same year. In 2000, the school ‘closed’ only to reopen the next year and rebrand itself as the Western Hemisphere Institute for Security Cooperation. As citizens of the United States engage in uproar over Russian meddling in our elections, we stand in a nation that has indulged in a rich tradition of interference in other nations’ governance.

I looked down at the cross in my hand with the realization of what I held. This tool of execution. This archaic electric chair. This noose. This pyre. This needle. This wall. This cross. The thousands of ways we have killed people by the power of the State. The thousands of ways we have continued to miss the whole point of it all. Adorning our walls and necks with an instrument of death, forgetting it’s implications for those that we kill, embedding it with jewels and filagree and flowers. Compromising the Gospel as it fits our needs, our prejudices, and our economic goals. Slathering the name of Jesus like butter over burnt toast, attempting to cover up the burning.

I looked down at the cross in my hand and realized how much of Christianity remains unconverted. We seek and speak and vote to banish Jesus from our company. As the arbiters of condemnation, we speak with Paul’s words, challenging people about whether they are ‘saved,’ without lining up our own lives agains the measure of Jesus words and example to discover where we stand.

We have Christians walking around bold, condemning people to their left and right without taking an honest inventory of the unrelenting cruelty that pervades their life both in word and in deed, stripping them of any claim to the name of Jesus even as they use that name to rain down judgment on their neighbor.

Jesus was there when she said the same words that he spoke as he died: I thirst.

How do we find justice for her when we cannot even Say Her Name?

Still without a name, we can know that the same system of white supremacy that killed Sandra, by one means or another, took down Girl, 18, Mexico as well. This system that teaches us to fear one another. This system that criminalizes and dehumanizes people of color. This system that targets the most vulnerable for elimination by the power of Empire.

What can we give her in death that we did not give her in life? We can tear down the system that took both their lives. We can tear down the system that this cross in my hand represents, this symbol of state violence, this symbol of the powerful intimidating the people into fear. Leaving Jesus on the cross to intimidate those who would rise up against the Romans. Leaving Michael Brown in the streets of Ferguson. Leaving Jose Antonio Elena Rodriguez in the streets of Nogales. Leaving Sandra Brand unchecked in her cell. Leaving Girl, 18, Mexico to pass from recognition under the heat of the Sonoran sun.

We can educate ourselves to understand that we have caused the very flow of humanity that we seek to impede. We can spend 5 minutes researching our own nation’s abuses of others’ democracies for every 1 minute that we spend outraged over Russia’s abuse of ours.

We can start by tearing down that Wall. We can start by understanding that Jesus is not on our side of it. Like a spear, the wall has pierced his body, separating blood from water, limb from limb.

In this, our desert, he pleads through the rusty slats that pierced his side once more, “I thirst.”

3 thoughts on “When We Cannot Say Her Name”