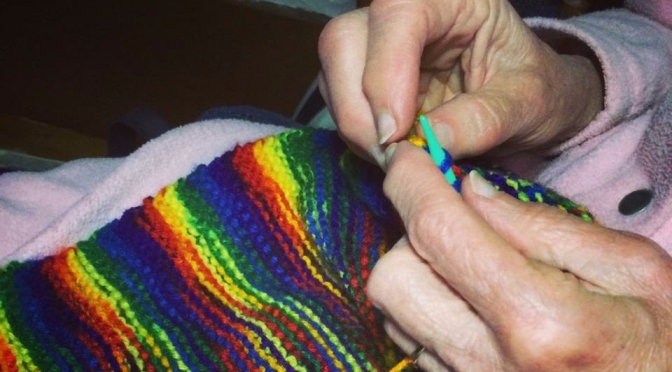 The knit rainbow stole lay warm and heavy across my black clergy robe as I stood in the pulpit of my aunt’s Presbyterian church in West Chester, Pennsylvania.  I looked out into the congregation from the pulpit, and down into the eyes of my young cousins, nieces, and nephews.  I told them that the rainbow stole my aunt had knit was – at the same time – both the heaviest and the lightest weight that had ever been placed upon my shoulders.

Days earlier, I was in the air somewhere between Houston and Philadelphia when my aunt passed away. Rushing to be at her side, I had gotten there too late. I landed in the arms of her son, my cousin Jeff, who took me from the airport back to her house. Now, he and I, the two ordained pastors of the family, shared the pulpit and this momentous task of sacred remembering.

Touching the yarn of my stole as I stood in that pulpit, I remembered watching my aunt’s slender fingers move nimbly as she knit it together two years earlier. Jackie was still in chemo sessions, and it was the last time that she and I had time together to talk – just the two of us – without all the noise and beautiful chaos of our family gatherings that makes quiet, private moments hard to come by.

I always remember the last sacred conversation that I share with someone – the blessing.  The moment is not always the same as the last time I see someone, although there may be some awareness of finality. For my younger Aunt Amy and I, it had been that evening in her garden, where we laughed and talked. When she insisted, despite her frail condition, on walking up the street to the point where Mount Washington overlooks the city of Pittsburgh. We watched as the street lights overcame the falling darkness, and she shared with me her happy memories, her plans, and her dreams. A few years later, with Aunt Jackie, that conversation happened in the side room of her house in West Chester. I kept her company while she knit rainbow stoles for the Presbyterian General Assembly that convened in 2014 to discuss marriage equality.

Jackie sat in the rocking chair, and I sat on the couch, watching and chatting. She explained that knitting these stoles for the General Assembly was her way of making sure that LGBTQ+ folxs had full 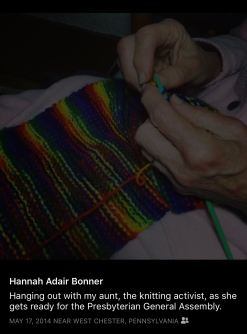 equality in the church. She told me that she wanted LGBTQ+ folxs to know they are loved and accepted in the church. She had witnessed so much pain, and she wanted it to stop. She believed they should have the ability to both stand in the pulpit as preachers, and to sit in the pew together as spouses.

I had always been able to tell Aunt Jackie my secrets, ever since I brought my first boyfriend over in high school. She had told me not to elope with that boy, and I had told her there was no chance of that happening. Yet that evening, all those years later, words failed me. A silent question hung heavy in the air between us.  An unspoken wondering. I looked at my feet, and somehow we reached an understanding. I did not say a word, but my face was so hot and my heart beat so fast – I could hear the blood pounding in my ears and I felt sure she must be able to hear it as well. She, in turn, told me everything I needed to hear, the relentless clicking of her knitting needles telegraphing love out with each and every stitch.

This year was different.

The wrapped Macy’s box that my mother handed me was shaped the same as everyone else’s, but there was an unmistakable heaviness to my gift. When I opened the box, the rainbow spilled out. Aunt Jackie had sent me one of her protest stoles; perhaps the very same one that I had watched her knit. My breath caught in my throat. I wondered if I had turned pink, or worse red. I wondered if my family guessed at the meaning of her gift, a meaning that would have felt treasonous to my conservative Christian parents. If they did, no one spoke of it. My mother admired the colorful “scarf” that had – for the first time in our family’s history – broken the predictable rhythm of five different colored gloves or slippers for the five Bonner children.

I never thanked Aunt Jackie. As the days after Christmas turned into weeks and then months, I thought about what I should say to her. I had plans to call. I wanted to write. Yet, I never spoke to her of the stole that she had knit with so much love and given with so much meaning.

I was not ready to acknowledge what I believed she wanted to affirm. I had been brought up in a world that daily shamed and condemned this part of me. I needed more time, but it was time that Aunt Jackie simply did not have. She would not be able to be there when I was ready. She would not be able to put her arms around my shoulders when I needed to find my courage, so she sent me something else to lay across them instead.

The next couple years were grueling for both of us. As she went through chemo and radiation, getting weaker and weaker, I began my vigil at the Waller County Jail. Our lives were both under threat, mine from the social cancer of racism and hers from the ravages of the physical one. Like the rest of my family, she worried about me but never tried to talk me out of it. Those that know me best know how futile it is to try to dissuade me once I have set my mind to something.

In January of 2017, I placed my body between a white nationalist and a group of Muslim women. I ended up with a knife close to my back. It shook me like no other close call in my life had been able to do. It plunged me into a space of deep withdrawal and reflection about the value of my own life. It was a couple months into this period, in April of 2017, that Aunt Jackie passed away.

I spent that week with my cousins preparing for her funeral. I discussed her life with her daughter, Beth, and liturgy with her son, the Rev. Jeffrey Nagorney. I contemplated what I would say and what I would wear to her funeral. I had put the rainbow stole that she had knit for me into my suitcase, as I usually took it to stressful places for comfort. I felt it’s bulky, chunky weight in my hands, and I decided that I would wear it over my black academic robe.

Stepping into the pulpit that day, I was finally able to thank her properly. In that moment, I realized that the best way to honor my aunt’s life was to live mine; not just to stay alive as I had been struggling to do in Texas, but to truly live. I knew the joy it would have given my aunt to see me go from survival to thriving. That, I decided, was how I would thank her.

The night before, I had received a phone call about a position in Tucson, Arizona. As a coast-hugging water-lover, I had always said I could never live in the desert. Yet, for some reason, I had told them I would call them back after the funeral.

I dialed the number. When they picked up, I told them I would come to Arizona and interview.

My soul and body longed for rest. Longed for distance. Longed to be close to the earth. To the dirt.

Landing in Arizona, I fell in love – with the desert – with the heat – with the wind that swept away all the whispers of what others said I should be.

The strength of the saguaros called out to my soul. I sat and watched the sun set. I woke up in the morning and had tea with an old friend. I knew in that moment that this was a place where I could live. Not just stay alive, but live. Maybe for the first time in my life.

I began building a home again for the first time in many years. I felt safe enough to see the parts of me that I had spent a lifetime hiding from myself. I was surprised to find that the shame that I had expected to feel was not there, nor was the fear. I felt only joy, relief, and celebration. Freedom. Acceptance. Wholeness. Health.

My queerness did not treat me like a stranger, even though I had spent a lifetime turning away from it. It simply settled comfortably and quietly on my shoulders. Familiar, like the gentle weight and warmth of Aunt Jackie’s stole. Comforting, as if it had always been there – because it had been.

At first, I held it close to my heart, knowing that eventually I would have to let it out into the sunlight. I knew I could not spend a lifetime fighting for liberation and wholeness for others, and not be willing to give the same gift to myself. My life had been too defined by transparency and authenticity to make it possible for me to keep for long this treasure to myself.

I write this now, with Aunt Jackie’s stole laying across my shoulders, her love and acceptance knit into every stitch.

Thank you Aunt Jackie, for loving all of me before I could love all of myself. Consider this your long-delayed phone call. Your stole welcomed me, comforted me, emboldened me. It did exactly what you created it to do. You can trust that I will continue doing exactly what I was created to do, for I too was knit together in love.

For you created my inmost being;
you knit me together in my mother’s womb.
I praise you because I am fearfully and wonderfully made;
your works are wonderful,
I know that full well. (Psalm 139:13-14) 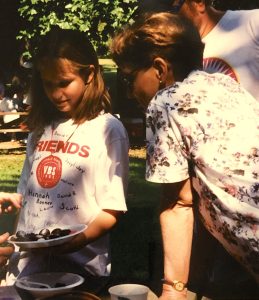 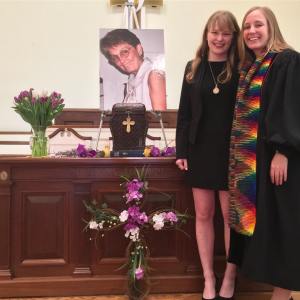 17 thoughts on “Knit Together in Love”