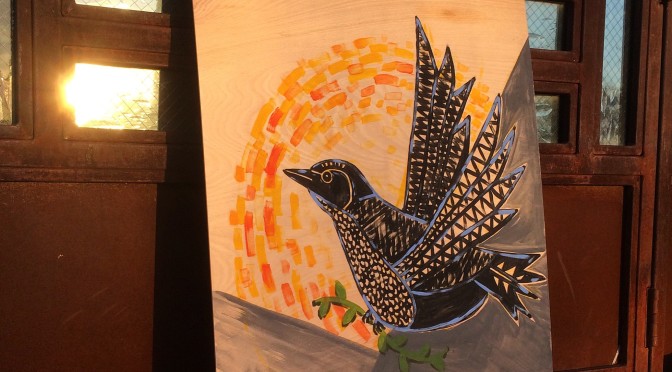 “Hey, you up?” There’s only one thing that could mean, I think to myself, pulling on my robe: JJ brought me food. She has been doing it ever since she moved in a few months back. Working long hours, and then picking up something to eat on the way home, and bringing something for me as well. At first, I used to tease her that she was trying to fatten me up; but as time has gone on and finances have gotten tighter, I don’t feel amusement any more; I only feel gratitude.

She is a raven to my Elijah; making sure I don’t go to bed hungry.

Come to think of it, ravens have become pretty common around these parts lately. Although unlike Elijah’s story, they don’t swing through with a mouthful of bread. Instead, they take the form of lunches after church; bags of groceries when my car broke down and money got tight; bills at restaurants, intercepted and paid before they could make it from the waitress’ hands to mine; texts from down in our kitchen, letting me know Sim Q is cooking; and, yes, late night hollers of “Hey, you up?”

I can’t help but think of our dinners at the Isaiah House, my heart’s home, where I lived the happiest year of my life with Rebekah and David, Sarah and Tom, Luke and Timothy, Ms. G and Ms. S. We were a whole bunch of strangers become friends become family, which is not too far off from my life these days.

Our meals were the best eating of my life. They were a collision between rice and oil and the vegetables from our garden; occasionally topped off by a cake that Ms. S or Ms. G had gotten from the food bank. We ate vegetarian, except on birthdays, for reasons having to do with finances and stewardship of the earth’s resources (food you grow yourself is free after all).

Although we were not all in agreement on this, and when Ms. G could get her hands on some chicken wings, into the toaster oven they would go. “Hey, you hungry?” she’d whisper to me conspiratorially, slipping me some buffalo-battered deep-fried protein: our little not-so-secret secret.

The two most treasured food memories of my life are as follows: my grandmother’s blueberry pancakes, and Rebekah’s Tomato Pie (made with ingredients from the backyard of the Isaiah House). I will probably never get to eat either of them again, but I will never forget the love that went into making them so much more than food.

That is the way it so often is. Food, as necessary as it is, is so much more than food. It can be a means of showing love, expressing solidarity, and creating community. In the act of sharing food, we take the thing without which we cannot live and we give it to another; as if to say that we do not want to live without one another; as if to say that in sharing what gives us life, we give our lives to one another.

That was what Jesus meant when he picked up a loaf of bread when he was having dinner with his friends. He picked up the loaf in front of him and he broke it into pieces and gave the pieces to the friends sitting around him. As he did it, he said, “This is my body broken for you, do this in remembrance of me.” In doing so, this word made flesh, God made man, did what comes natural to so many people – he used food to send a message about love. He used food to say that he would give his life for them. Only in his case, he meant it literally not figuratively.

Within a matter of hours after they had eaten together, he would be arrested unjustly; he would become a victim of some of the most extreme police brutality in recorded history. Without the rights of a citizen, and because he was an ethnic minority, he would receive no legal representation. He would be given the death penalty and promptly executed by the State.

When he regained his life, his friends would not recognize him. At least not at first. Not until he picked up a loaf of bread, and broke it, and handed it to them.

That is what we have been doing ever since: handing each other pieces of bread to show that we are family and we give our lives to one another.

When the early Christians began sharing communion, the breaking of bread and sharing of wine, it had a lot more to do with community than ritual. When they gathered and shared food, there were many amongst them that actually needed that food. The act of sharing was more than a tradition, more than a recitation of words, it was a necessity. In feeling their need for food and their need for one another, they recognized their need for the one who had first broken bread for them and told them to share it and told them to do it in remembrance of him. As they sacrificed what they had for one another, they remembered the ultimate sacrifice that he had made for them.

Now, I don’t know about you, but the funny thing is, I have never wanted to be a Solomon with all the wealth in the world. I have always found the story of Elijah to be so much more compelling. A man surviving on pieces of bread, brought to him in the beaks of ravens and later from the hands of widows and orphans. A man who spoke truth to power at the risk of his life, and went where God told him to go without questioning the reason.

Don’t get me wrong, I much prefer to have a reasonably stocked refrigerator, and bank account if we are being honest. Yet, there is something so faith provoking about hearing those words, “Hey, you up?” and knowing that as long as there is bread in this world and people faithful enough to share it, none of us needs to be hungry.

Yet, while there is so much bread, there are still so many that are hungry. All we need is a little more faith. All we need is a little more confidence in the fact that two thousand years ago, when Jesus said, “do this in remembrance of me,” he really meant it. He really meant that if someone puts a loaf of bread in your hands, the most faithful thing you can do with it is share it.

I do not think I am the best at remembering this, but I have a lot of ravens around me and they are teaching me how. It’s hard sometimes; and it’s humbling; and it’s so very beautiful.