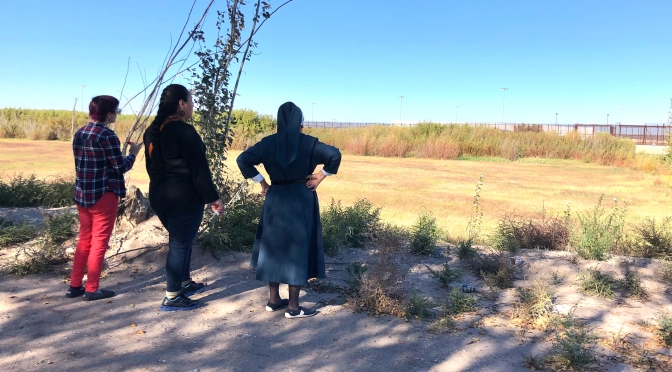 “You are the answer to our prayers,” Madre Irene said in delighted surprise as we entered the quiet church yard. She had just finished breakfast with her fellow sister in the Order of Mary the Sorrowful Mother, when we came through the gates of Cristo Rey. The two nuns had been discussing the children in the tent city, within just a stone’s throw of their town. They had been struggling to think of what they could do. In this quiet town, on the Mexico side of the border, they could see and hear the children play in the mornings through the slats of the wall, with helicopters flying overhead to watch them. Yet, while they could hear them, and they could see them, still it seemed there was nothing they could do.

“We had decided that all we could do was pray, and then I walked outside, and here you were!” she informed us.

For months in Tucson, Free the Children had thought and planned and worked. We raised money, and bailed a father out of detention. We raised awareness, but we wanted to do more. Finally one of the mothers in the room, Carolina, simply insisted, “Why don’t we go there? Why don’t we see what we can do?” Now, here we stood, before the answer to our prayers, only to discover that we were the answer to theirs as well.

When the tent city had opened at Tornillo in June, as housing for immigrant children separated from their parents, the tents had been set up a short distance from the border wall. They were put together on federal property, exempt from state laws regarding children, at the Tornillo/Guadelupe Port of Entry between – on the Mexico side – the State of Chihuahua, and – on  the United States side – the State of Texas. As the statements that the tent city would close constantly transformed into falsehoods, the cluster of tents itself transformed into a militarized town that dwarfed the population of Caseta, the Mexican town. As the tent city sprawled outward, closer and closer to the border wall, it also came closer and closer to the people on the other side of the wall, making it impossible for them to ignore. Their hearts became deeply grieved by the constant sight and sounds of children imprisoned between fences, guards and the border wall.

By the time, we walked through the gates of Cristo Rey Catholic Church in Caseta, it had been four months since I had first spotted their spires. Sitting at the gate to the tent city throughout the month of June, I had spotted the distinctive twin steeples of the church and felt comforted by their presence. I hoped the illusion of watchful eyes, that the twin arches of the steeple created, would be comforting to the children as well. I dreamed about what it would be like to be able to send a more direct message, a message that they knew was for them. We had tried, from the US side, to do so with a balloon, and ended up with a vigilante sticking a gun in our faces. At the time, in June, the promises that the tent city would close seemed so certain, that it did not seem worthwhile to risk lives to pursue it any further.

Yet, the tent city did not go away, and neither did the desire amongst all those around it to let the kids know that they were supported and loved. Over the months, the tent city transformed from a temporary crisis intervention space for separated kids, to a long term incarceration facility for all manner of kids who had been classified as unaccompanied minors. As the classification of kids expanded, so did the numbers, from hundreds to thousands, until the sounds of their play vibrated the border wall and echoed over to the town of Caseta.

The Sisters of the Sorrowful Mother, standing and watching the children from across the wall, could not have been more aptly named. Where were all the sorrowful mothers of these children scattered? How many were back home in the countries from which they had journeyed? How many of them were waiting somewhere in Topeka or Boston or Durham, unable to claim their children because it would ensure their own deportation? How many of them had been deported and were unable to communicate?

Where were the many sorrowful mothers in whose place these Sisters now stood?

Where were the many sorrowful mothers whose grief mirrored the original, Mary, who watched her wandering son arrested, criminalized and bound? 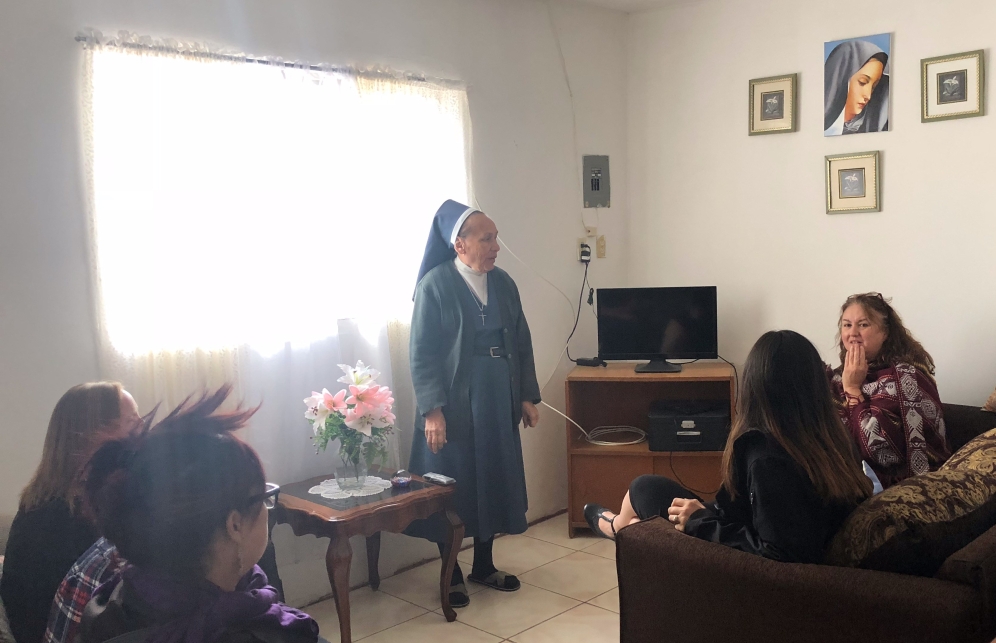 After greeting us in the courtyard of Cristo Rey, Mother Irene invited us all into her living room: Mari, Summer, Carolina, Becky, Juan, Marla and I. She sat us down and began by ascertaining which of us was baptized, and more significantly which of us was baptized en la Iglesia Catolica. She was not disappointed to discover a few Catholic saints among us. We talked about the kids, and what we could do to bring hope to them. We told her about the dreams of being able to let them know they were not alone, “No estan solos,” the message that was to have been hung from the original balloon. She ushered us over to the church when the service was to start, and we were able to join the mourners at the morning’s funeral.

It was hard to leave when the time came to return to Arizona. Mother Irene took Carolina’s head in her hands gently and prayed a blessing over her, and then over all of us. The surreal and sacred time that we had shared with the Sisters was hard to release. Yet, they assured us – and we assured them – that it was only the beginning. We would return with a banner, with a message for the kids. They would hang it from their steeple so that if any kids might be able to see it, they would know that they were not alone – that God, the Church, and the people of Caseta were with them.

Over the next couple weeks, we communicated with our new friends, this sacred friendship giving birth to a profound mission of hope. The Sisters decided on a message that would be a little more direct. Rather than “No estan solos” – you are not alone – they preferred, “Liberen a los niños” – Free the children. This was not the time for subtlety. People were suffering. Mothers were suffering. Children were suffering. The Sisters of the Sorrowful Mother had spent decades inhabiting lives of contemplation upon that sorrow, and service in response to that sorrow. Who better than they to know what to do and what to say, in response to sorrow and injustice?

As soon as was humanly possible, we returned. Piling into a minivan, we embarked once again in this journey of friendship, across state lines and border walls to Cristo Rey. Arriving, a group of people from the town had joined the Sisters in gathering to greet us and to make it known that Caseta supported this mission of mercy that the Sisters were pursuing. Members of Cristo Rey stood in the shadow of its steeples to make sure that their would be no impediments to the task. They explained that they were fed up, that they were tired of watching the kids imprisoned, that it was the right thing to do and they were the right people to do it. They wanted to send a message of hope and unwavering support. 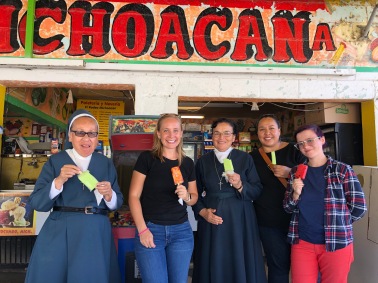 Unfurling the banner, the Sisters smiled in approval and fetched a smaller matching banner that they had printed as well. We would take it to Joshua, who was their watchful mirror, keep vigilant watch on the US side of the wall.

Climbing the steeples on ladders, the men of the town hoisted the banner into place, suspended between the two towers that pointed skyward. The Sisters stood proudly looking up at the banner, watching as their prayer took the shape of action, and their compassion took the shape of courage.

Driving away from Caseta was even harder the second time than it had been the first. We had broken bread together, and heard more of one another’s stories. The Sisters had sung happy birthday to me as we walked through the streets of the town where Madre Irene had lived since before I was born. There was a sort of peace in knowing that the kids in this tent city were cradled gently in loving watchfulness between Joshua on the US side, and Madre Irene on the Mexico side. And now, thanks to their banner, we could pray that they would know it too. 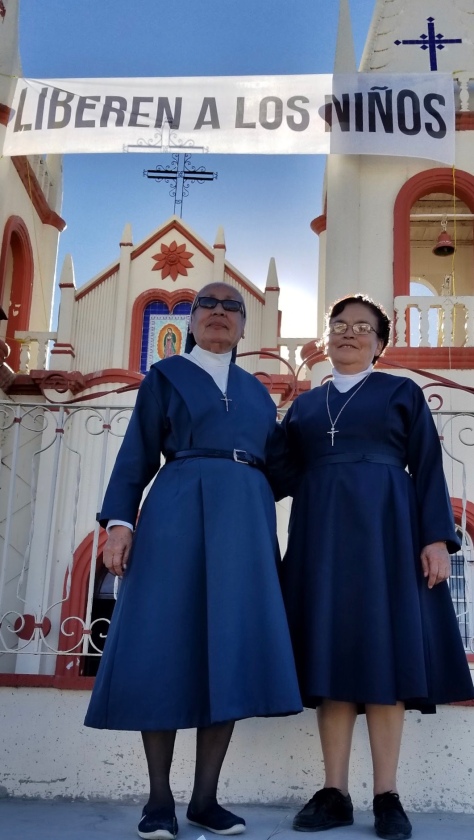