To put your money where your mouth is and support Sandra’s family go to the Sandra Bland Legal Fund; keep track of the movement at SandySpeaksOn.com

“That’s Bernie Sanders,” my sister said, indicating an unpretentious man with a full head of white hair that had slipped past me and tucked himself into a table in the shadowy corner of East Street Cafe, a Thai restaurant in Washington DC’s Union Station.

“Really? Are you sure?” I asked her doubtfully, as I took another bite of my basil chicken across the table from Ms. Geneva Reed-Veal. For better or for worse, he was not a man who had quite the signature look that more polished politicians cultivate; which is probably part of his charm. 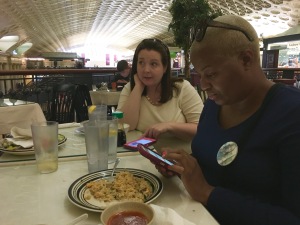 I honestly was not sure if it really was him, but my sister has been working around DC politicians for almost 20 years, so I took her word for it. “Someone should go talk to him. You know he has been saying Sandra Bland’s name for months. Someone should tell him you guys are here.”

I find it wise to do what my big sister tells me on the rare occasion that she tries to exert her seniority, so I pulled my chair back from the table and walked across the restaurant.

“Well, I’m just over there having dinner with the mother of Sandra Bland and I thought maybe you’d like to meet her.”

I got up to walk back towards our table only to see that Shante, Sandra’s oldest sister, was already headed towards me. She is a woman who knows how to get things accomplished, so I was not surprised to see her coming after me to see if I needed support.

Bringing Ms. Geneva back over to the table, I felt my body trembling. The trembling continued as Ms. Geneva sat down next to Senator Sanders and they began to talk. I was not trembling out of fear or out of being star-struck, it was more that I was completely blown away by the unexpectedness of it all, the sacredness of the moment, and the sincerity of all involved. You do not often get to witness moments like that. Moments when agendas are laid aside and people who might not otherwise ever have the chance to connect without cameras watching can simply honor one another’s pain and humanity.

“What happened to your daughter is inexcusable,” he said. “We are broken, and this has exposed us.” He then continued by promising that he would continue to #SayHerName #SandraBland and would not give up in the pursuit of justice.

The spontaneity of the moment lent sincerity to words unrehearsed, phrases unplanned, in an interaction that was never supposed to take place.

We asked Senator Sanders if we could take a picture with him and he consented. He did not impose upon Ms. Geneva to ask for a picture of his own. He did not use the moment as an opportunity to promote his campaign. He took no record, he made no statement. He did not try to turn it into a publicity stunt. He simply made space for a sacred moment, and then let it pass without trying to gain anything from it. 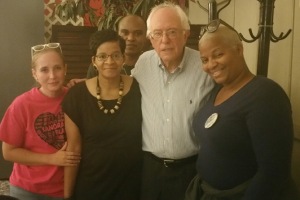 For that, I respect him. For that, I am grateful. That choice may not have made him a very good politician, but it made him a better man.

When we sat back down at the table, I put my head in my hands and simply continued to gentle shake. “Is she okay?” Shante asked. “Yes, she’s fine,” her mother replied, “she is just blown away.”

When each sacred moment appears and passes, it gives me renewed hope and confidence that the legacy of Sandra Bland’s struggle for justice is making it’s eternal mark in this world.

Senator Sanders was right. Her death was inexcusable; yet her legacy moves forward without yielding.