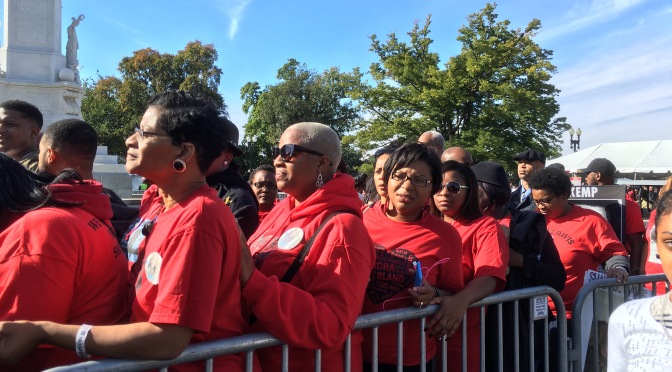 “Hey, I am from Houston,” I said recognizing the gentle face of the woman walking next to me among the families of those lost to police brutality walking together to the 20th Anniversary of the Million Man March. Behind us in a sea of red shirts was Trayvon Martin’s mother, ahead of us Michael Brown’s father. To my right, was the family of Sandra Bland who had become like family to me. To my left was the beautiful woman with the long hair from the city where I lived.

“Hello, Hannah,” she said, recognizing me from advocacy meetings in the city of Houston that we both called home.

A moment of painful awareness washed over me as I realized that she remembered my name, and I did not remember hers.

“I’m so grateful to find myself beside you. God has an amazing way of bringing us to the right place,” was what I said out loud. But through my mind raced a million thoughts. Why could I not remember her name, when she could remember mine? Why was it that it had been at least a month since I had checked in on what was happening with her? What had we done lately in the city of Houston for her son, Jordan Baker?

Walking in the midst of a sea of red shirts, the parents and brothers and sisters of those still seeking justice, I felt overwhelmed both by the sorrow and the beauty of it. Mothers from different cities who had to fight for their children when no one except each other could really understand, walking arm in arm with one another at last. They have been talking. They have been building a new kind of family. They have been seeking to hear and support one another. They have been pushing back against the “hashtag survival of the fittest” struggle for the public’s attention that social media layers onto their mourning process, and they have been building community and solidarity.

Many of them carried signs with pictures, putting a face with a name for the lives that had been lost. Many names were as recognizable as the main street in your hometown; while Sandra Bland Parkway actually was a street name itself. Others, I will be honest to admit, I had not heard before. I was grateful to those who had a face to go with those names; it helps them stay in the memory.

For me, that is part of what it means to honor the legacy of Sandra Bland. Because Sandra Bland understood the importance of continually taking action and continually seeking to remind people of the humanity of those names that teeter on the edge of becoming symbolic. “What if that was your uncle?” she says when alluding to Walter Scott in her #SandySpeaks video.  “I’m trying to turn this into a PRAYrade” she wrote when Ram Emmanuel led a parade for the the Blackhawks’ Stanley Cup victory the day after a mass shooting in Charleston, South Carolina. Instead of shifting focus to the sports victory, she became creative in finding a way to use it to remind people of our responsibility to one another. She did make a poster for the parade, but it said: “Real Hawks Pray for the Emmanuel 9.”

The one thing that got her really fired up more than any other was the loss of life, and people’s indifference to it. That extended even beyond police brutality to her concern about violence in the city among young people when the weather got warm, and the homicide rate rose. Life was important to Sandra Bland. Stopping those who took the lives of another was often the focus of her videos.

Then her life was lost to us, and we still do not know exactly how.

As the 20th Anniversary of the Million Man March began, Sandra Bland’s mother did get to see her daughter’s face on the screen. She did get to hear them #SayHerName as out of all the families gathered, the family of Michael Brown and the family of Sandra Bland were the ones each given one minute to speak.

She did get to hear her daughter, one of the most natural public speakers the movement has been blessed with, Mrs. Sharon Cooper speak to the thousands gathered at the Capitol saying, “The world has shown us that we need to control our own narrative… Can I ask you to do one thing: Say her name.”

In the midst of walking through the greatest pain of her life, Ms. Geneva Reed-Veal still is thinking about the suffering of others. She is still strong enough to keep room in her heart for other’s losses along with her own.

This should not come as a surprise to anyone. It takes a strong woman to raise a strong daughter, and this is the woman who raised Sandra Bland.

*It is important to remember that many times the reason that names fade from view is that the family becomes drained of resources in their fight for justice. Help the Bland family continue their fight: Family Legal Fund.